The business of eCommerce exhibiting a healthy year-over-year sales growth has left the brick-and-mortar companies in awe, as the physically buying seems to have decreased and mobile apps are taking over the online buying game. A dramatic shift is occurring in the tech industry on one end, the physical storerooms are struggling to survive and on the other side, the React Native apps are influencing the tech industry.

It is safe to say – the simple way to easily reach the users, engage them, improve the experience, make them buy, retain them forever, and rack up the business ROI (Return on Investment) is just “Completing the E-commerce storeroom with a React Native app”.

There are a lot more reasons and benefits which strengthen the argument that React Native App is a need of the hour to make business stay on top amidst the fierce competition.

The user interfaces are bespoke for the target platform and therefore are smooth and a pleasure to use. The part of personalization added through mobile app development not only crafts a wow experience but also urges them to purchase as it makes them feel valued.

With an app, the need of opening the web browser, typing in the URL and then waiting for the page to load gets tiresome because it requires just a click on the app’s icon. On the app store the data part on the device, and therefore, very less data is transmitted between the server and the application that in turn, reduces the response time. The apps run on the framework, while websites use JavaScript to run functions that make the app perform functions faster.

A declarative coding style makes React Native code extremely flexible and understandable for developers. It’s also profitable when a developer needs to jump into a new project and assimilate quickly. The explainable style simplified coding paradigms and the coding process, resulting in code that’s easier to read for both the system and developers.

Targeted users usually browse mobile apps at least 4-5 hours a day, which signals you have got the chance to engage users and enrich the user experience using the same app that has managed to get a space on the user’s mobile. Additionally, when the users find the content published on the app valuable, then they can agree to pay the subscription fee for the exclusive content, or the in-app purchases can be implemented with special content to create an additional revenue stream, which increases the bottom line.

React has a prestige among the developers as it regularly introduces new features for developers in its app development platform.

React Native is a good choice when you have enough budget to support long-term app development with features such as, 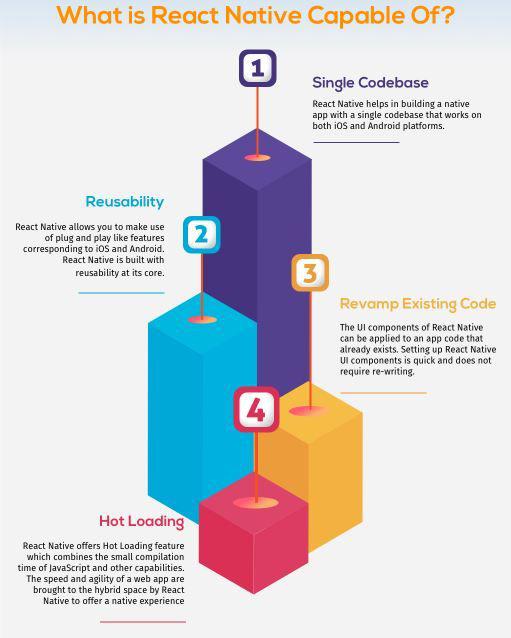 React Native is not a great choice for,

The brands we mentioned here are just a handful of the many that use the React Native framework.

Did you just miss the hype of React Native because of your little knowledge in this regard? You have no clue that for what this inclusion has become the talk of the tech town all of a sudden? Unless you are happy to be left behind, it is very important that you update yourself by steering clear of all your inquisitions regarding React Native. Before you go ahead and demystify the unknown facts about the React Native, it’s time you squeeze some time out to tap into recent updates of React Native.

In React, every DOM (Document Object Model) has corresponding “virtual DOM object”. Virtual DOM creates a virtual copy of the original DOM. Due to its one-way data binding, manipulating the virtual DOM is quick rather than editing original DOM because nothing gets drawn on screen.

While there are ways where React Native produces different results in iOS and Android platforms, the fact remains that with this open-source framework, you are able to eliminate the duplication of work. You no longer need to rewrite the same code again and again when creating an app. If you are building an app and wish to cater to both iOS and Android users alike, you might want to opt for React Native Development rather than Native iOS and Native Android framework instead. Reduce human capital cost by reducing the number of people needed in your app development team.

The success of any business dwells in the place where their users are found. The opportunity lies in complementing the React Native development with a mobile app to sell the best products and services to the right customers at the right time.

The early birds catch the worms, so take the benefit of the first move to increase the users’ outreach, improve user experience and user engagement, augment the revenue, fuel up the user loyalty, and get ahead of the competitors. Look no further, it’s damn clear, the React Native is the new hope for technology that will live up to its much-created hype in the years to come.

In a nutshell, React Native allows the businesses to go native and react to the evolving market trends with an app that works everywhere. Hire expert react native developer, based on the project scope, time limits, and development budget. Let’s connect, meet and discuss!