Customer experience for the mobile is more important to our business at Latitude Technolabs than the average developers think.

The evolution of customized app development has touched new heights. Developers at Latitude Technolabs are not only ready to work with smartphones and tablets, but also with various wearables and smart devices which contains Internet of Things.

At Latitude Technolabs, we do the detailed planning about various types of processes to dive into the development of apps and specifically the Hybrid App and Native App development. During the preliminary research for the app’s development, developers would face a couple of challenges like what should be built – Native vs Hybrid App? Which platform would be the best for the organization and end users. The answers to these queries depend on the following features:

Native Apps and Hybrid Apps provides way to meet different needs and purposes of users and developers, and neither type of app can be said to be the perfect solution. Customer have to decide which one suits their needs better or which app is ideal for the business needs, including budget and specific goals.

A native app is a program that has been coded in a specific programming language for the devices that have specific Operating System. For iOS, developer usually use swift and for Android it is Java. As native apps are for a specific platform, they can take advantage of operating system features. It has the advanced ability to use device-specific hardware, software, and it can use the latest technology available on mobile devices.

A large number of the most popular apps out there like Pokémon Go, Twitter, and Waze, are fully native. Building cross platform for native apps are Xamarin, React Native, Titanium.

Hybrid apps are a combination of native and web apps. It is an application in which the same app can be deployed in various operating systems like Android, iOS, Windows, etc. and run in various browsers such as Chrome, Mozilla, IE, Safari etc. It works on “write once and deploy everywhere” principle. Hybrid apps are cross-platform and can be distributed between app stores immediately without several versions. Most of the hybrid apps built using cross-compatible web technologies as HTML5, CSS3, jQuery Mobile, Titanium, and JavaScript etc. 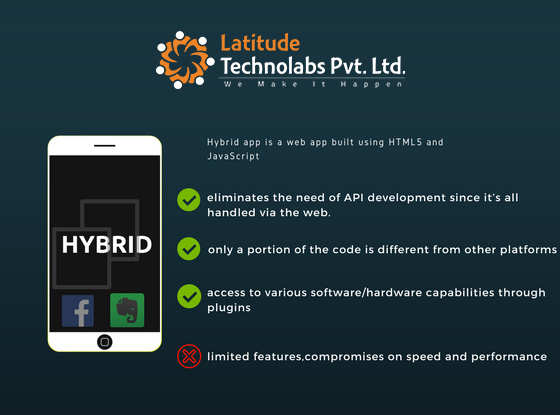 Mobile development is transforming with modern business are approaching different apps. We know different apps have limitations in execution, but developers at Latitude Technolabs are increasingly coming up with solutions to overcome those challenges. At last, what matters is a great user experience, intuitive, responsive, security and speed. Developing an app that matches all the need of the client is the clear winner.

No matter what your concerns are, we, at Latitude Technolabs, are here to help you out. We have a team of world class developers, who can give your business idea a mobile touch. Let us know your requirement, and our support team will get in touch with you within 24 hours. Our team of expert will analyze your need and suggest you the best development methodology. No regret in utilizing a free consultation.